If you read our last post on Mohammad M. Wareh you would know that he was allegedly involved in getting a security guard named “Sudani” boys to massage and was alarmed when a cop called him in 2014.

Well, we now have old AOL chats from the early 2000s where Mohammad not only admits to doing what he did, but he also BRAGS about it like a total sicko – his screen name back in the day was Sheb00Shami on America Online: Again, here is Mohammad being confronted on Facebook when he tried to set up a person unknowingly in the late 1990s, Mohammad tries to play it off as some sort of “joke” – what a sicko:

And note, here he is whining about being exposed stating he wants to get the person giving us this information “locked away with no internet access”: 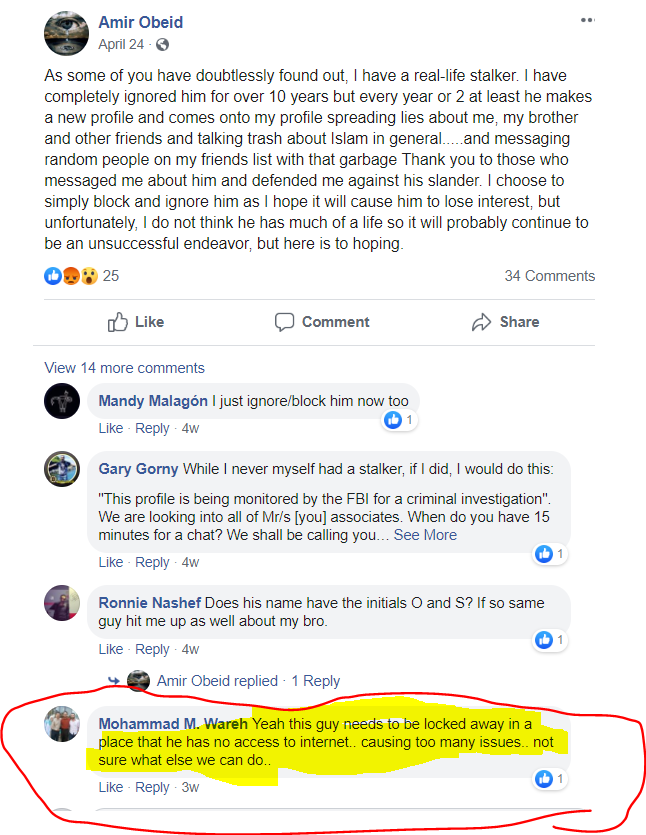 And in 2014, when a police officer called him about the situation, he corroborated everything except for lying and saying he was scared of him too – then he had the nerve to message the person who told on him on Facebook:

As you saw above he admitted to “joking” in a disgusting way to try to get the above person molested, and next in another Facebook post claims “he almost forgot” about the whole child molesting thing. Anyone that knows trauma and fear, you don’t almost forget that sort of thing – especially if you are claiming you were “scared” of someone like this:

You may have also noticed in the AOL chat Mohammad mentions a guy by the name of “Rani”. He’s talking about his partner in crime, who we also did a story on by the name of Rani Altinawi. Let’s show you again what Rani stated:

Notice how creepy and disgusting this is and how it parallels Mohammad’s joking style. Mohammad Wareh finds sexual assault and rape as “a joke” apparently.

We also were able to find out that Mohammad seems to be friends with other douchebags on this very site, take a look at his friends list on Facebook:

The four highlighted are also on our site:
Kamal Chohan
Ramsey Nashef
Amir and Rasheed Obeid

One thought on “Confirmed: Mohammad Wareh Brags About Being Massaged By Man and Supplied Child Molester With Boys When They Needed 20 Dollars In the Late 1990s”