Meet Amir Obeid, a Muslim-“American” if that’s what you want to call him.

Check out these emails including the first message in which he tries to convince an American who wants to leave Islam that hanging out with Americans is terrible and that gays are worse than animals:

Above in that highlighted sentence, Amir Obeid states, “I believe you are doing yourself a great injustice by distancing yourself from the Islam and seeking solace in your American friends’ company.”

This, from a guy who lives in America, and who’s mother and maternal side of his family are all from Louisiana.

Next, we get to see how Amir Obeid views homosexuals. If anyone knows Amir, it’s that he likes to get in to religious debates with people. He thinks he’s got it all figured out.

In this email, Amir is responding to this person who has stated that Islam cannot be true because Islam states that animals obey God’s will, and yet there are homosexual acts committed by animals. Therefore Islam is wrong.

You’ve heard of idiot savants, this guy is an idiot deluxe.

Amir apparently likes to “look at the bee” as a “sign of Allah” as you see in the email above. This guy clearly has life figured out.

Moreover, who would want to be in this nonsense religion. This email is from 10 years ago, and when we look at this guys Facebook, he is still in this crack pot nonsense – and the situation with Islam has gotten much, much worse than it was 10 years ago. With the climate the way it is, it looks like this ex-Muslim made the right decision for him or herself.

Let’s read more messages from this “great thinker” and “moral person” shall we?

Above he states to this person he is trying to abuse and manipulate that:

I don’t know about you, but I don’t know many people that are “free to do anything” because of weed? Have you heard of many angry pot heads? Amir over here and his friends like Ramsey seem to fit the type, and then he projects it onto this person he is trying to manipulate.

When you read that underlined sentence, he’s saying he knows this person, and he wants the person to “let it slide”. It being his friend Ramsey, and his brother Rasheed and another friend by the name of Aladin Khouraki and stolen his car, drove it somewhere else, and told him it was stolen – among other previous acts by this same group that calls itself “Trey Q” as you will see later in this thread

This after this group of people who Amir associated or associates with had also stolen and abused this person numerous times before this incident. And what does Amir chastise this person to do? To take more abuse. What a douchebag, let’s read more shall we.

When we get to the second paragraph in this email, Amir states that Ramsey apologized to HIM about what Ramsey did to ANOTHER PERSON. And then Amir says, “He apologized to me. Did he to you? I don’t know.”

Wow, gee, what a great friend this guy is – to Ramsey. He had a nice long conversation with him about this, and it never came up if he apologized to this other friend that Amir is so apparently caring to? I’m calling bullshit on that.

Also, it’s obvious he doesn’t care at all for this other person. He’s very apathetic about the other person’s boundaries or feelings on the issue. He expects this person to do as Amir says. What a narcissist.

Then in our final paragraph of this email, Amir then starts talking about his “beautiful religion”.

For those who do not know Amir Obeid, he was a student at Orange Crescent School and a member of the Islamic Society of Orange County. Here is an excerpt from the Islamic children’s book that this idiot was taught:

Oh yes Amir, so amazing. What a great religion you got there you idiot. It’s about killing.

This mosque has had numerous problems with Jihad, including having two ISIS members and former American terrorist Adam Gadahn who was taught there and converted to Islam because of the teachings of this mosque.

In 2009, out of no where, Amir Obeid decided to email this person, and well, his email was absolutely ridiculous. Let’s take a look at what he said below: 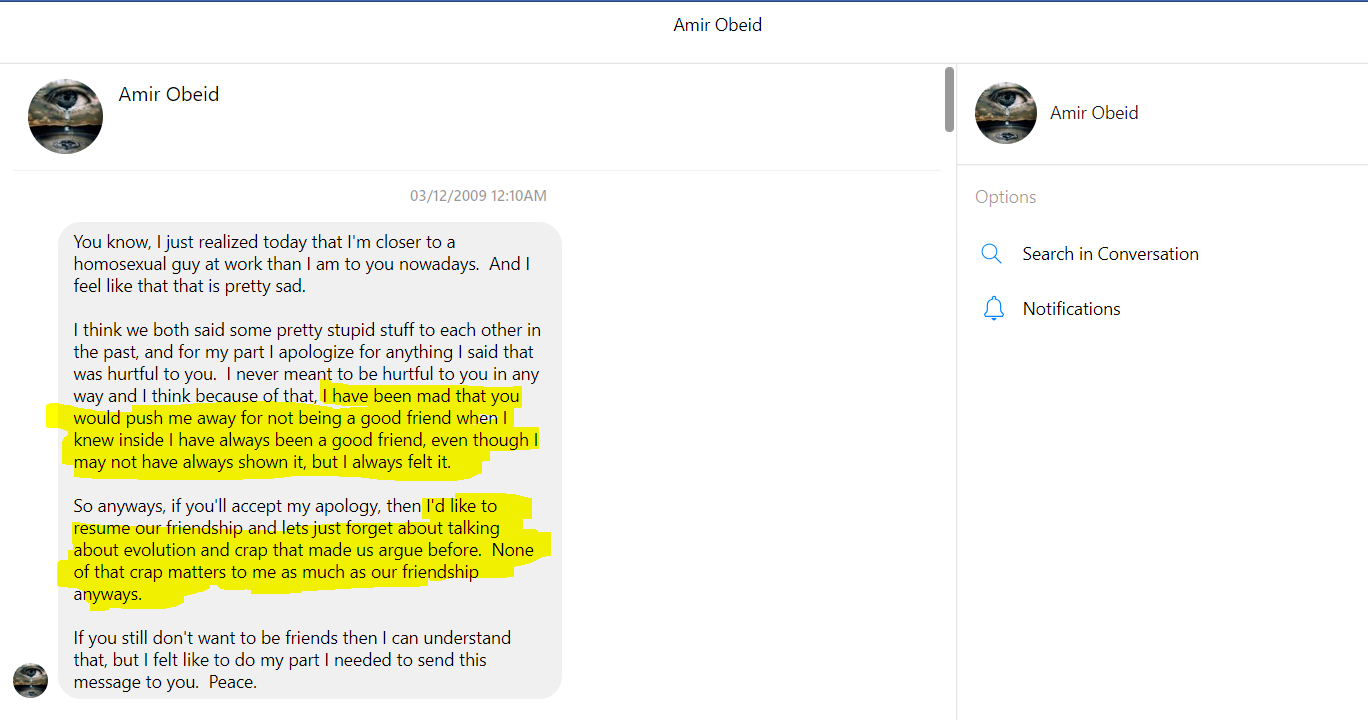 So here we read he says he is mad at this person, because he “pushed him away”. If you remember in the emails from 2007-08, it was Amir that was speaking all nonsense, and showing no concern for this person’s feelings. Yet, somehow, he’s angry because he felt “pushed away”. What a manipulative douchebag.

This person ended up responding to Amir’s nonsense, when he probably shouldn’t. It’s obvious to read that Amir is a manipulator. He stated that he doesn’t want to talk religion, although in the first email, on confronting this person, he made it all about religion.

Anyway, let’s see this an excerpt of this person’s response: 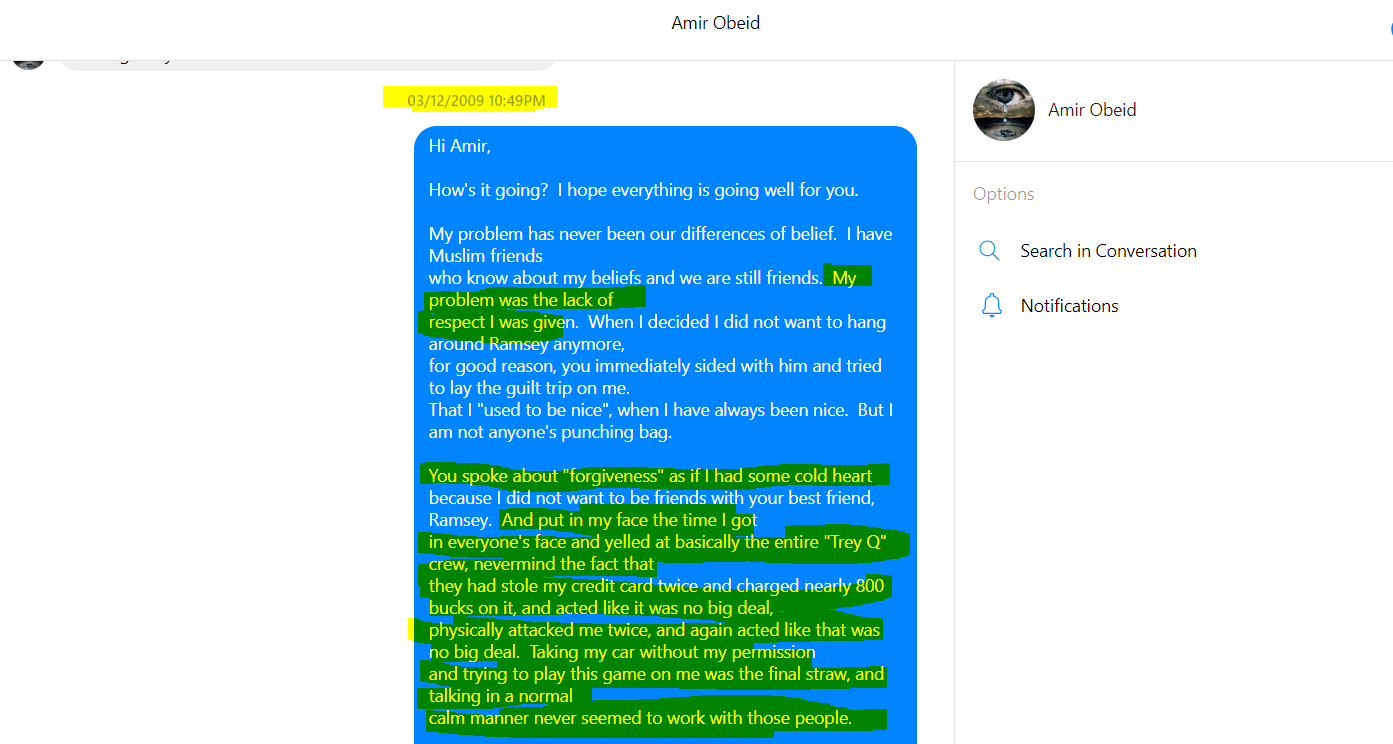 Wow, look how respectful this person was to this douchebag. Man, don’t you wish he just let this idiot have it?

Now Amir responded to this and said a whole lot of nonsense. Let’s take a look: 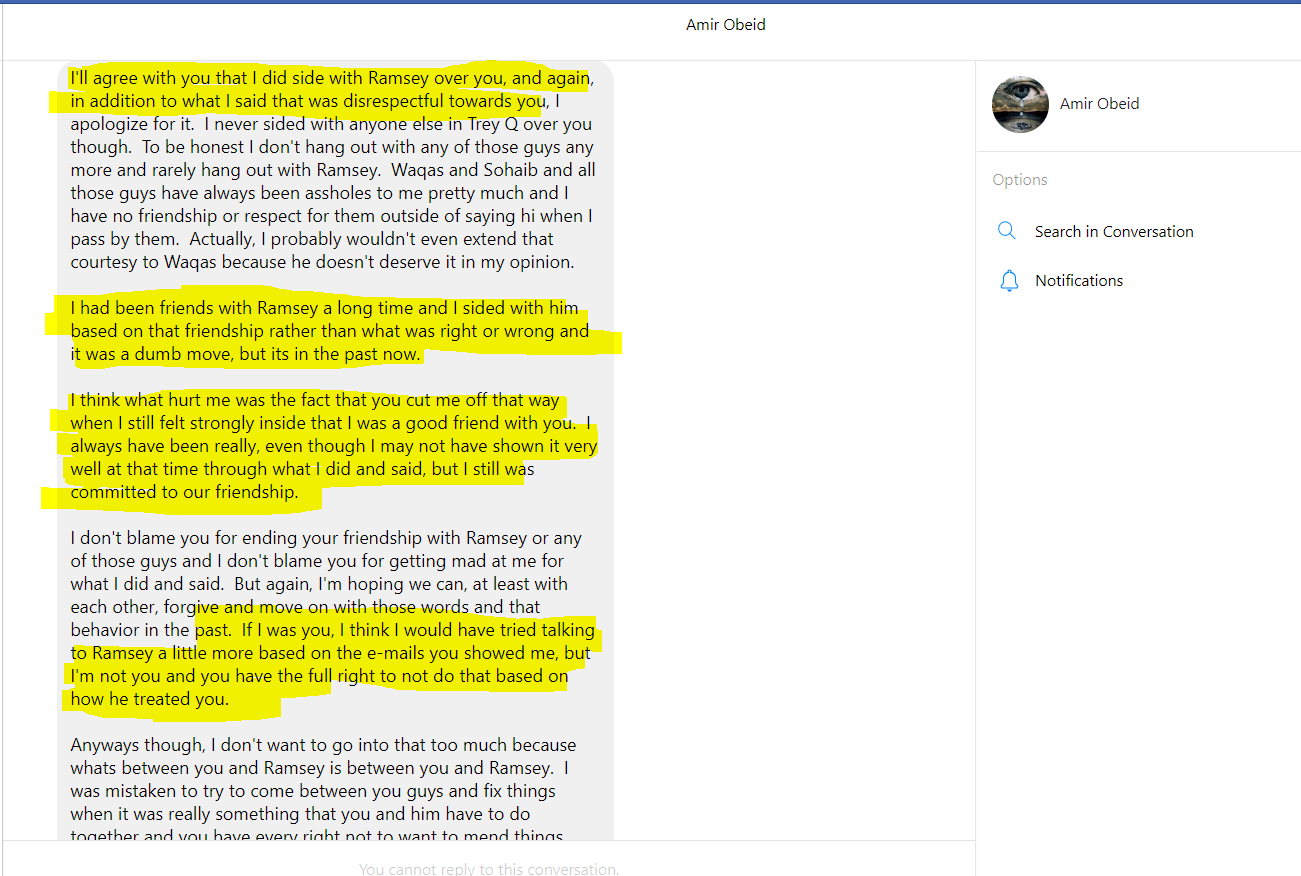 Here Amir admits to siding against this individual, did a bunch of horrible things to him and states “it’s in the past”.

Then he keeps talking about how he’s mad because how dare this person “push him away”. Amir states that he himself feels he was a good friend – even though he doesn’t show it. Well Amir, being a good friend means SHOWING IT. Otherwise you are not a friend – but an apathetic stranger or an enemy.

Then in the fourth paragraph, he actually sticks up for Ramsey and states that “I would have tried talking to Ramsey a little more…”. Amir was doing Ramsey’s bidding.

In any event, Ramsey did come back into this person’s life – and we are sure he regretted it as he got exposed on Douchebags Exposed.

For more on Ramsey Nashef, check out our post Ramsey Nashef – Pathological Liar Who Has No Problem Lying to The Courts

That’s right, Ramsey Nashef got exposed on this site, and was so embarrassed that he tried to get a court order and told a whole bunch of lies just to take down that page. And the best part of it all is that he cried in court as the judge announced she was not going to give him what he wanted. It was epic.

Anyway, when you look through this entire post, you read Amir’s messages, and it gives you an idea of the way he thinks. It is clear this person has a lot of toxic ideas and is a douchebag of epic proportions.

He expects a person to be his friend – regardless of the way he treats that person.

By now, if you have been reading Amir’s emails, you notice a pattern. He seems to try to insinuate the problem is something other than the problem, and when finally pressed, he owns it. Even his apology wasn’t heartfelt. He emailed this person with a bullshit apology and got called on it and he admitted to everything – and also showed his true intentions.

In any event, this person unfortunately bought Amir’s apology at the time and the “friendship” resumed. But only for a short time, it was only a matter of time before Amir acted out.

Remember how Amir admitted to ending the relationship, and it was all his fault, well, let’s read this email from 2013:

Here Amir states that this person “threw the relationship away”, and that he was “one of his only real friends”. Oh yes, so real he’d never show it, and you’d never know it.

And finally, here’s Amir calling this person a psychopath – talk about projection:

Amir Will Only Debate “Normal, Rational People” On Islam

Yeah, only “normal and rational” people. Let’s show you again what this guy thinks is is “normal”:

And again, all his inhibitions are removed when he smoked weed:

54 thoughts on “Amir Obeid of Pearland, Texas and Manager of Denny’s Tries to Manipulate and Abuse Friend and Convince ex-Muslim that Americans are “terrible” to Hang Out With”